There is much more to this play than Jack and a beanstalk. Of course, there's the proverbial giant, but there is also the giant's overworked, over-wrought wife, an aria-singing harp, a golden-egg-laying chicken with performance anxiety, and a blue-eyed stranger who looks surprisingly like Jack's long-lost father. Naturally, there's the village at the foot of the beanstalk and the giant's home in the sky, but there is also, 10 years earlier, a sailing ship caught in a storm off the coast of Pago Pago ("or was it Bora Bora") with its blue-eyed master pulled mysteriously from the wreckage by a giant hand. Certainly, there's Jack's distressed mother and the peddler who sells Jack the magic beans, but there is also the peddler's story of having bought the beans from a blue-eyed stranger; the Ladies Plum and Pomegranate, who provide the comic relief in Jack's village; and Jack's pals, including a rough and ready tomboy named Adelaid. Without a doubt, there's the giant's "fe, fi, fo, fum," but there is also his wife's rhyming collection of "bigness" puns. With all the familiar ingredients in the mix, plus so much more, and with fresh and witty dialogue, this play will be a rediscovered delight for actors and audiences alike.

"We loved the playÑ thought it had a great flow to the story with good roles for many actors."
Review by Eric Snyder, Gore United Methodist Church, Gore, Okla.
"What a funny, imaginative script for kids' and adult roles. A majority of roles are for kids. It answers the question, " What happened to Jack's dad?" We gave magic beans (jelly beans) to every child who attended."
Review by Ron Solomon, Make It Up As We Go Productions, Pearland, Texas

"We attached a cardboard and cotton cloud on the beanstalk with a string pulley to raise and lower it to give an ascending or descending feel!"
Tip by Eric Snyder, Gore United Methodist Church, Gore, Okla.

"A spirited sparkle has been added to this timeless story. Side-splitting humor appeals to the entire family." -Kilgore News Herald

"Even kids raised on Nintendo and Star Wars shouldn't get restless during this production. Small fries eat this stuff like tapioca pudding, while unconsiously absorbing some positive messages about the fun and excitement of the theater." -Dallas Observer 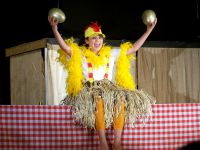