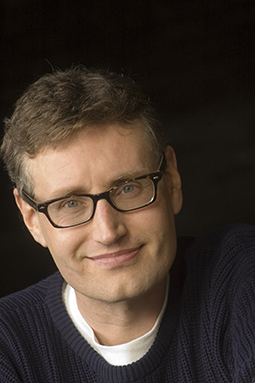 Eric Coble was born in Edinburgh, Scotland, and raised on the Navajo and Ute reservations in New Mexico and Colorado. His scripts for adults have been produced on Broadway (Tony- and Pulitzer-nominated The Velocity of Autumn), off-Broadway (Bright Ideas), in all 50 states of the U.S., and on several continents. His plays for young audiences include award-winning adaptations of Lois Lowry’s The Giver and Gathering Blue as well as The Girl Who Swallowed a Cactus, Sherlock Holmes: The Baker Street Irregulars, Ghosts in the Machine, Swagger, Cinderella Confidential and a dozen other published scripts that have been produced at The Kennedy Center, Dallas Children’s Theatre, Childsplay, Metro Theatre Company, Oregon Children’s Theatre, First Stage, Denver Center for the Performing Arts, Cleveland Play House, Adventure Stage, Alliance Theatre and many others. Awards include two AATE Distinguished Play Awards for Best Adaptation and the Charlotte Chorpenning Award for the body of work of a children’s playwright.

Pecos Bill and the Ghost Stampede

Ghosts in the Machine

Ghosts in the Machine (One-Act Version)

The Storm in the Barn

The Girl Who Swallowed a Cactus

The Girl Who Swallowed a Cactus