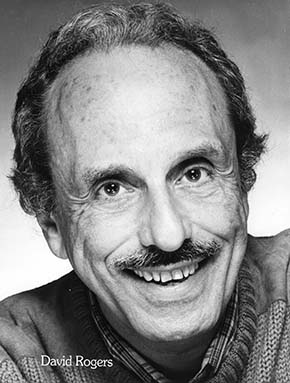 David Rogers, Broadway playwright who has written for television, opera and night clubs as well as authored five novels and many short stories, died June 5, 2013, in Westport, Conn. He was 85 years old. Of his six Broadway shows, he was best known for his 1981 Tony- nominated musical Charlie and Algernon, for which he wrote the book and lyrics and which debuted in London starring Michael Crawford at the Queen's Theatre in 1979. Rogers was born in New York City on December 15, 1927. He fell in love with the theatre after his mother, Deborah, started taking him to see plays at a young age. His career began as a child actor on the radio alongside a young Beverly Sills on "Rainbow House," and he made his way to Broadway at the age of 17 to play Silvius in the 1945 production of As You Like It. At the same age, he sold his first written piece, The Virgin Sturgeon, which was bought by Gourmet magazine. During the Korean War, he was drafted and served in the Army in the signal corps. Upon his return, the GI Bill allowed him to study at the American Theatre Wing alongside Jack Lemmon and Lee Marvin and to meet his mentor, Nancy Hamilton. Hamilton championed his work, submitting several of his sketches to the "New Faces" revues, which garnered him wonderful reviews and had him working with other such "New Faces" writers as Mel Brooks and Ronny Graham. He then contributed to the Ziegfeld Follies, writing for such stars as Tallulah Bankhead, Beatrice "Bea" Lillie, Bea Arthur, Carol Haney and Hermione Gingold. He wrote the revue Young at Heart for the Crazy Gang in London's West End, and later had his play Killing Jessica, starring Patrick Macnee, produced there, too. After the war, he wrote for television on such shows as The Jackie Gleason Show and, later, The Carol Burnett Show. His play From Here Inside My Head was produced at Playwrights Horizons, starring Hal Linden. Rogers spent decades writing more than 45 plays and musicals published by Dramatic Publishing Company including adaptations of Flowers for Algernon, Tom Jones and Brave New World; the musicals Cheaper by the Dozen, The Hobbit, The Twelve Dancing Princesses, Our Miss Brooks and The Sting; and original pieces such as Here and Now, Soft Soap, The Best of Broadway, Big Rock at Candy's Mountain, Boys and Ghouls Together, Charlie and Algernon, The Dream on Royal Street, Get Witch Quick, If a Man Answers, It Happens Every Summer, JOY!, The Late Great Me, The Legend of Arthur Banana Plant, The Marriage Bit, May the Farce Be With You, Never Mind What Happened, How Did It End? , Rally 'Round the Flag, Boys!. Rogers is well-known as the author of the comedy play, The Beverly Hillbillies, also published by Dramatic Publishing, which is based on the television program created by Paul Henning. Additionally, he wrote the book for the highly anticipated musical version, The Beverly Hillbillies, The Musical??!!. He was also commissioned to write the opera The Hero by the Lincoln Center for the Performing Arts, for which he won the Prix D'Italia, and collaborated over the years with such composers as John Kander, Alan Menken and Charles Strouse. All five of his published novels have been translated and printed worldwide and include Somewhere There's Music and The Great American Alimony Escape. In the mid-1980s, Rogers returned to acting in the Broadway production of Doubles, starring Austin Pendleton and Ron Leibman; Broadway, directed by George Abbot; and A Funny Thing Happened on the Way to the Forum, starring David Alan Grier. He had many starring roles in regional theatres around the country and off-Broadway, as well as touring his own