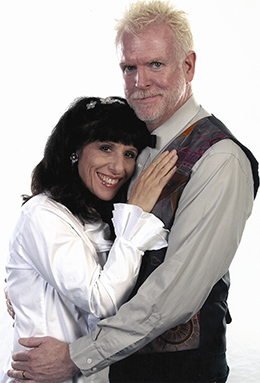 Flip Kobler and Cindy Marcus (left) have been writing together for more than 25 years. They spent many years at Disney where they penned the largest-selling video in history, Lion King II: Simba's Pride, as well as the sequels to Beauty and the Beast, Pocahontas, The Hunchback of Notre Dame and The Lady and the Tramp. They've also written for Star Trek Deep Space Nine, and their feature film, Jack and the Beanstalk, starred James Earl Jones, Christopher Lloyd, Katey Sagal and Chevy Chase. They have more than 30 plays and musicals available at Dramatic Publishing, Samuel French, Pioneer Drama Service, Playscripts, Inc., and Contemporary Drama Service. Marcus is the author of two theatre textbooks: Playdate, a Parent and Teacher's Guide to Putting on a Play and The Ultimate Teen Actor's Guide, both available through Meriwether Publishing. Kobler is the co-author of the textbook The Complete Guide to Church Play Production. But their real passion is running their Showdown national teen theatre camps.

US A Teen History