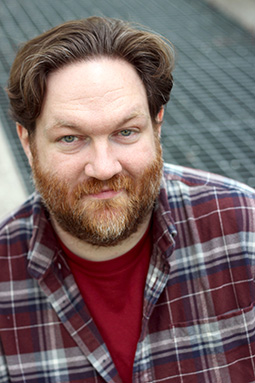 Christopher M. Walsh has been acting and writing in Chicago for more than 20 years. He is a member of the artistic ensemble at Lifeline Theatre, where his writing credits include the Arthur Conan Doyle pastiche, Miss Holmes, and adaptations of Dickens’ A Tale of Two Cities, Dumas’ The Count of Monte Cristo, China Miéville’s The City & the City and a musical adaptation of Austin Grossman’s Soon I Will Be Invincible, written in collaboration with composer/lyricist Christopher Kriz. He is also a company member and literary manager of WildClaw Theatre, where his one-act play, The Hunters, was presented as part of the live horror anthology Motel 666. His radio plays, Comparing Notes at the End of the World and Fracture Zone, were a finalist and winner, respectively, of the Deathscribe Festival of Horror Radio Plays. His work has been seen on the stages of Lifeline Theatre, WildClaw Theatre, The House Theatre of Chicago, Steppenwolf’s 1700 Theatre, A Red Orchid Theatre, Strawdog Theatre Company, the Factory Theater, Griffin Theatre Company, The Right Brain Project, City Lit, Stoneham Theatre in Boston, the Adrienne Arsht Center for the Performing Arts in Miami and Mob Hit Productions in Calgary, Alberta. Originally from Muskegon, Mich., he moved to Chicago to study acting at Columbia College. He makes his home on the city’s North Side with his wife, Mandy, and three cats.