What is it like for a woman when her husband becomes the president of the United States—and she is suddenly thrust into the spotlight? This witty, sly and deeply moving script explores the hopes, fears and loves of Lady Bird Johnson, Pat Nixon and Betty Ford. In three scenes taking place in the family quarters of the White House just prior to the end of living there as the wife of a president, each of the women confides alone to the audience. Secrets are spilled about their early years, their husbands' rise to power, their romances with the men, their unique paths as wives in the White House, and their feelings about imminent retirement. Lady Bird Johnson, while preparing a tea for Pat Nixon, defends her husband's quirks but finally admits to herself, "Politics is his oxygen." Mrs. Nixon, drinking tea alone in her room on the eve of her husband's resignation, works on her mail, picks at her food and guardedly recalls happier times before exploding in anger about Watergate and the political world. Betty Ford is discovered reading a TIME magazine in her bathrobe. Forestalling preparations for tea with Rosalyn Carter, Betty lightheartedly recalls past escapades, but eventually admits to being quite lost about life after the White House. Defiantly pushing back the fear, she sails out the door to meet Mrs. Carter. Each of the three portraits becomes intimate, by degrees, as the women wrestle with what Pat Nixon called "the hardest unpaid job in the world."

"The audience loved it!! Several people told us it was the best entertainment they’ve ever had at their Tablescapes event. They just went on and on how much they enjoyed it ... We’ve just had the best time this year sharing these stories."
Review by Kathryn Dawkins, Center Players Community Theatre, Madison, Miss.
"Our audiences absolutely loved Tea for Three, and the actresses became very attached to their roles! We miss Lady Bird, Pat and Betty already."
Review by Schatzie Schaefers, Cyrano's Theatre, Anchorage, Alaska
"Tea for Three was a great evening of entertainment. Elaine Bromka's performance brought to life three of America's most intriguing first ladies. Her ability to transform between Lady Bird, Pat and Betty kept our audience entertained from start to finish. Elaine's professionalism was displayed throughout the entire show. This is the second time I had the pleasure of hosting Tea for Three in the past few years, and it gets better every performance. Our Soldiers and Families at Fort Hamilton New York provided nothing but positive comments. Their only request was when will there be another show with 3 new first ladies. I would recommend Tea for Three to anyone interested in a key period of our country’s history."
Review by Bob Vogt, Family, Morale, Welfare and Recreation, Fort Hamilton, N.Y.

"A necessary historical corrective for this callow misreading of women's history and human nature." —www.culturalcapitol.com

"A rare chance to see such a touching, funny and intimate portrait of these three fine first ladies." —www.austinonstage.com

“A beautiful script, full of humor and heartbreak. The production paints realistic—and often unthought-of—images of the first ladies.” —austinonstage.com

“A glimpse of the personalities of the presidents, through the eyes and hearts of the women who knew the private men, before they entered their all-consuming public lives.” —Record-Review

"Brilliant! Reaches across the aisles and inspires hope." —www.womenarts.org

"Good stories … subtle … even silence is steeped in emotion." —The New York Times

"Will stay with you." —The Villager 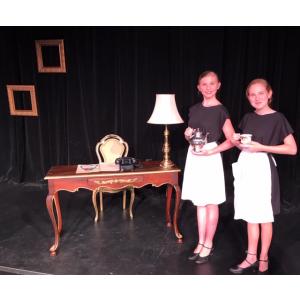