In 2.5 Minute Ride we're taken on a poignant and funny journey, rich in anecdotal detail, through the Kron family album. Among Lisa's eccentric relations, for example, are the grandmother who stuffed her house with cosmetics because she felt sorry for the Avon lady, and the brother who, residing among wall-to-wall Gentiles in Lansing, Michigan, had to resort to the Internet to find a Jewish bride. And there's Lisa's father, 74-year-old Walter, who, in spite of near-blindness, diabetes and a heart condition, insists on family trips to Cedar Point amusement park in Sandusky, Ohio, the world capital of roller coasters, to take breathtaking rides such as the Demon Drop and Iron Dragon with Lisa. But this isn't her only journey with her ailing father. Walter, a German-born Jew who attended school with boys in Hitler Youth uniforms and escaped Nazi Germany as a teenager by Kindertransport only to return as an American soldier assigned to interrogate captured German personnel following the war. His parents, however, were unable to escape. In an effort to better understand her father's personal history, Lisa accompanies Walter to Auschwitz, where his parents were killed, and where she understands more clearly the joys and sorrows of her father's heart. With wit and compassion, Lisa creates a complex, startling and searingly funny meditation on how human beings make sense of tragedy, grief, and everyday life.

"Celebrates the power of laughter to help us come to grips with the sometimes horrific turns life takes." -Variety

"The manner in which Kron interweaves these stories, and several more, is nothing short of astounding." -Pittsburgh City Paper

"When I realized that the show was about to end, my first thought was: Can't she just call home, get some more stories, work them out, and keep going?" -Backstage 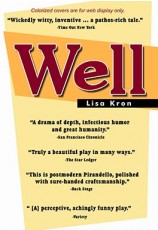