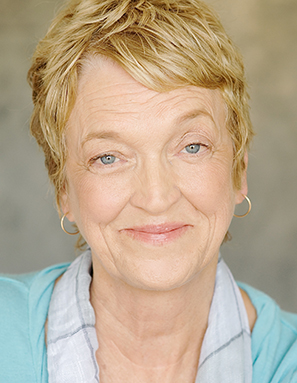 Nancy Linehan Charles has performed onstage, in film and on television for more than three decades. She is the artistic director of a flash mob Shakespeare troupe in Los Angeles called Salty Shakespeare, which received the Annenberg Grant and summer residency in 2012. With this grant, Charles directed the troupe in Hamlet at the Marion Davies Guest House in Santa Monica, California. She is a member of two theatre companies in Los Angeles: Rogue Machine Theatre and Pacific Resident Theatre. Charles has twice won the Los Angeles Drama Critics Circle Award—once for the role of Albertine in Toys in the Attic (for which she also won the Ovation Award), and also for the role of Claire Zachanassian in The Visit. She has performed off-Broadway at the Classic Stage Company and regionally at the Geffen Playhouse in Los Angeles, the Alliance Theatre in Atlanta and the Kennedy Center for Performing Arts, among others. Her film credits include two award-winning short films: Piano Fingers and Clear Blue. Charles can be seen in Mike Nichols' Charlie Wilson's War (starring Tom Hanks, Julia Roberts and Phillip Seymour Hoffman), Steven Spielberg's Minority Report (playing the wife of Max von Sydow), Steven Soderbergh's Full Frontal, Francis Ford Coppola's Dracula, and she suffered a delicious death in the psychological thriller The Stepfather. She also plays one of seven witches in Rob Zombie's latest film, Lords of Salem. Charles played Bette Davis in Norma Jean and Marilyn (starring Mira Sorvino and Ashley Judd). Her television credits include recurring roles on We Got Next, Huff and Six Feet Under and guest-starring appearances on Longmire, NCIS: Los Angeles, 24, Blind Justice, The West Wing, Carnivale and ER, to name a few. Charles has published five adaptations of Shakespeare's plays for middle-school audiences through Dramatic Publishing: Macbeth, Othello, A Midsummer Night's Dream, Romeo and Juliet and Hamlet. These plays are being performed to resounding success in schools and theatres across the United States and in Canada. She has written a television pilot of Macbeth called Bard in the Yard—both a live-action and an animated version. Charles holds a master's degree in theatre, is a marathon runner and the mother of two fine young men: Charles Linehan, a Manhattan assistant district attorney, and Will Rothhaar, a working actor.