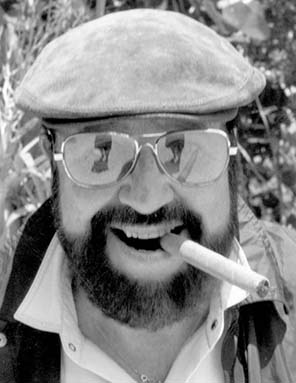 Jean Shepherd was a writer, humorist, satirist, actor, radio raconteur, and television and film personality. A master storyteller, he took bits and pieces from his youth in Hammond, Indiana, his adventures in the Army Signal Corps and stories of the obscure and infamous were all fertile sources for his tales. For almost three decades, he told these stories to eager radio audiences, in Cincinnati from 1950 to 1954 and on WOR in New York from 1956 to 1977. His other radio enterprise was live broadcasts on Saturday night from The Limelight, a nightclub in Greenwich Village. Shepherd began his entertainment career in Chicago as a performer at the Goodman Theatre. He did nightclub acts on Rush Street, appeared on Broadway in Leonard Sillman's revue, New Faces (1962) and in Voice of the Turtle, and played a dance instructor in the film The Light Fantastic (1963). He was also a sportscaster and did baseball broadcasts for the Toledo Mudhens and Armed Forces Radio. In the seventies, he took his talents to television in a series of humorous narratives for PBS called "Jean Shepherd's America," later continued on the PBS New Jersey Network as "Shepherd's Pie." Here he was able to show us the more offbeat aspects of America, particularly his own home state, which he loved to ridicule. This led to a series of teleplays for PBS/WGBH's American Playhouse: "The Phantom of the Open Hearth," "The Great American Fourth of July and Other Disasters," "Ollie Hopnoodle's Haven of Bliss" and "The Star-Crossed Romance of Josephine Cosnowski." His most popular and well-known work is the film A Christmas Story (1983) which he co-wrote and narrated. In 1994 he did a sequel, My Summer Story (aka It Runs in the Family). Shepherd wrote articles for several magazines, including Playboy and Omni, and was an early contributor to The Village Voice, most notably in his "Night People" column. His books include The America of George Ade; In God We Trust, All Others Pay Cash; Wanda Hickey's Night of Golden Memories and Other Disasters; The Ferrari in the Bedroom; and A Fistful of Fig Newtons. Shepherd passed away on October 16, 1999, at the age of 78.