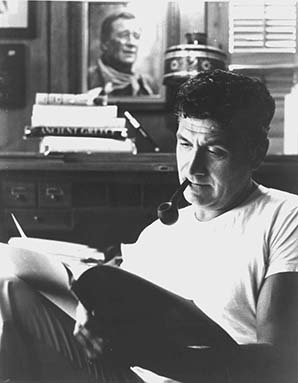 Among his many other awards, Andrew J. Fenady received the Western Writers of America's most prestigious honor in 2006—The Wister Award—for his lifetime achievements and contributions to Westerns.

He was born and raised in Toledo, Ohio, and graduated from the University of Toledo, where he appeared in leading roles in many stage productions. He later produced and acted in local dramatic radio shows and performed in summer stock, touring with the National Classic Theatre in a Shakespearean company. Once in Hollywood, he became a legman for Paul Coates, which led to writing and producing Coates' controversial television series Confidential File, winner of three Emmy awards. Three years and 150 programs later, Fenady and the show's director, Irvin Kershner, wrote and produced a feature film on a borrowed $15,000. This was Stakeout on Dope Street, the first of its genre, and the young filmmakers sold it to Warner Brothers for $150,000. Following this, Fenady wrote and produced the feature The Young Captives and created and produced The Rebel series for television (Nick Adams). The top-rated show lasted three seasons, and the Fenady-penned theme song, "Johnny Yuma," became a No. 1 smash for singer Johnny Cash. Another series, Branded, followed. Between seasons, Fenady wrote and produced the feature film Ride Beyond Vengeance. He then combined television and motion pictures with Hondo, which served as a television pilot. The Hondo project led to a long-term association with John Wayne's organization, culminating in Fenady writing and producing Chisum, a feature film starring John Wayne. Fenady has been honored with The Golden Boot Award for his lifetime contribution to westerns.

Also the author of several books, Fenady's novels include The Man With Bogart's Face, which received an Edgar award from the Mystery Writers of America. He also wrote the play and the screenplay and produced the feature film based on the book. Other novels include The Secret of Sam Marlow, The Further Adventures of the Man With Bogart's Face, Claws of the Eagle, Tom Horn and the Apache Kid, The Summer of Jack London, Mulligan and a Christmas western called Runaways, for which he is writing the screenplay. Fenady's latest novel is The Rebel: Johnny Yuma, based on the popular series he wrote and produced. Fenady has been a guest lecturer on writing and producing for motion pictures and television at universities,


Titles by This Author

THE BIG GUNS: or Whose Little Lily Is She?

The Happy Prince: A Radio Play