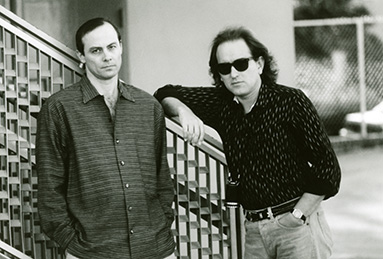 Tom Musca (left), producer and co-writer of Stand and Deliver, was raised and schooled (Phi Beta Kappa, Rutgers) in New Jersey. After stints in advertising, publishing and the music business, Musca earned an M.F.A. from UCLA Film School. While a film student, he won the Rod Serling Award twice and was a national award winner in the AFI Festival for a feature-length video he wrote and directed. After film school, Musca worked as producer, writer and director of magazine segments at the Mommoth Lakes television station until he sold his first screenplay, Little Nikita, which starred Sidney Poitier and River Phoenix. Other writing credits include the HBO pilot Adam and Eve and several episodes of the NBC television series You Again? starring John Stamos and Jack Klugman. Musca and Ramón Menndez continued their respective writing/producing/directing collaboration on Hollywood Pictures' Money for Nothing, which starred John Cusack, Debi Mazar and Michael Madsen. In theater, Musca was executive producer for Mark Kamble's Names, a "Hollywood blacklist" drama starring Dixie Carter, which won 12 Drama-Logue Awards including best writing, acting, directing and production. National Public Radio applauded Names as one of its Top Ten Plays for 1995. Musca has several film and television projects in development including Angels With Dirty Faces, a musical adaptation of the classic Warner Brothers film to star Michael Jackson; Botanica, a prime-time series for Warner Brothers and CBS television; The Chico Cervantes Project for Columbia and ABC television; The Sal Aunese Story for TriStar; Rubirosa for Rome's Erre Produzioni; Flight of Fancy, a whimsical fantasy for Casa Grand Productions; and Melting Pot, an urban political drama to be directed by Musca. In addition to producing his own projects, Musca has lectured on screenwriting at Loyola Marymount University and is also employed as a private tutor, consultant and script doctor for screenwriters and directors.