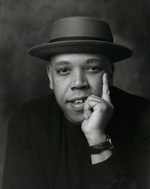 Robert Alexander is the author of 29 plays including Servant of the People (a play about the rise and fall of Huey Newton and the Black Panther Party) and the widely seen I Ain't Yo' Uncle: The New Jack Revisionist Uncle Tom's Cabin and Secrets in the Sands, the latter two originally written for the San Francisco Mime Troupe. He is also the author of the very popular and much produced The Hourglass. As the playwright-in-residence at the Lorraine Hansberry Theatre, he wrote several world premieres for that company including Air Guitar (a rock opera) and We Almost Made It to the Super Bowl (a tragicomedy about racism in the NFL). His works have been produced by some of the top regional theaters in the country including the Kennedy Center, Inner City Cultural Center, Los Angeles Theatre Center, the Hartford Stage Company, Jomandi Productions, St. Louis Black Repertory Company, Crossroads Theatre Company, Oakland Ensemble Theatre Company, the Mark Taper Forum, Karamu House, the Arena Players, Trinity Repertory Company, San Diego Repertory Theatre, Horizon Theatre, Actors Theatre of Louisville, the Bay Area Playwrights Festival, Woolly Mammoth Theatre Company and the National Pastime Theatre of Chicago. His most recent plays are Alien Motel 29 which, together with Freak of Nature and A Preface to the Alien Garden (Broadway Play Publishing, 2001), constitute the Erotic Justice Trilogy, Bulletproof Hearts, Gravity Pulls at the Speed of Darkness, Erotic Justice, The Neighbor's Dog Is Always Barking, Hatemachine, The Last Orbit of Billy Mars, Will He Bop Will He Drop? On a Street With No Name and Forty Acres. These latter plays have come to be known as the Erotic Justice Play Cycle. Many of Alexander's early plays have been printed in various anthologies, and I Ain't Yo' Uncle is available through Dramatic Publishing. Alexander has edited several play anthologies including Plays From Woolly Mammoth (Broadway Play Publishing, 1999), The Fire This Time (2004) with Harry Elam for TCG Books, which includes work by Alexander, August Wilson, Suzan-Lori Parks, Lynn Nottage and many others. Alexander and Elam have previously co-edited Colored Contradictions: An Anthology of Contemporary African American Plays (Penguin/Plume, 1996). Colored Contradictions includes works by Alexander, Suzan-Lori Parks, Cheryl West, Rhodessa Jones, Keith Antar Mason, Pomo Afro Homos, Carlyle Brown, Shay Youngblood, Talvin Wilks, Kia Corthron and many others. Alexander is the recipient of numerous writing awards and fellowships including grants from the Rockefeller Foundation, the Gerbode Foundation and the National Endowment for the Arts. He is the former NEA/TCG resident playwright at Jomandi Productions in Atlanta, Ga., and the former playwright-in-residence at Woolly Mammoth Theatre Company in Washington, D.C., thanks to a residency made possible by TCG and the Pew Charitable Trusts' National Theatre Artist Residency Program. A 1975 graduate of Oberlin College, Alexander holds an M.F.A. in theatre (playwriting) from the University of Iowa, where he was a Patricia Roberts Harris Fellow.