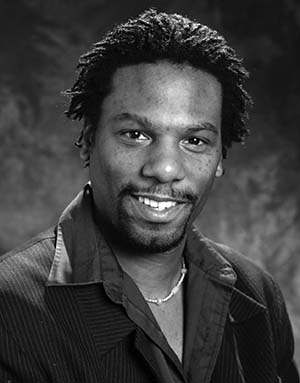 Reginald André Jackson is a playwright and actor whose works include stage adaptations of Christopher Paul Curtis' The Watsons Go to Birmingham—1963 and Bud, Not Buddy. Other pieces adapted for the stage include Mark Mathabane's Kaffir Boy, two of Rudyard Kipling's Just So Stories, and a collection of true-life accounts by victims, refugees, activists, reporters and aid workers, concerning the horrible crisis in and around Darfur, entitled Darfur Stories. As an actor he has performed at Seattle Repertory Theatre, Lake Tahoe Shakespeare Festival, ACT (A Contemporary Theatre), Seattle Shakespeare Company, Book-It Repertory Theatre (where Bud, Not Buddy originated), Intiman and Seattle Children's Theatre, among others. In addition to his stage work, Jackson has considerable experience working in arts and education and frequently tours with Freehold Theatre's Engaged Theatre Program, which takes Shakespeare to Washington state correctional facilities, hospitals, homeless populations and other communities that lack access to the arts. He currently lives in Seattle, Washington, with his love, Liza, and their young son Julius.

The Watsons Go to Birmingham—1963