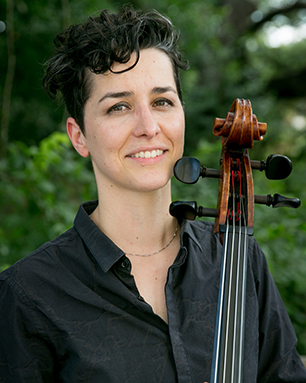 Originally from Greece, cellist Nora Karakousoglou is a sought-after performer, teacher and teaching consultant. Her music studies, which began in Greece and continued in France, concluded in 2016 with a doctorate in cello performance from the University of Texas at Austin. Her professors and mentors include Phoebe Vallinda, Stephanos Vassiliadis, Philippe Muller, Ophélie Gaillard, Jiannis Chronopoulos, Rhonda Rider, Bion Tsang, Jorja Fleezanis and Sharan Leventhal. Karakousoglou has performed as a solo player in recitals and with orchestras in the United States and Europe, and she has collaborated in chamber music with Joseph Silverstein, Lynn Chang, Judy Gordon and Colette Valentine, among others. She has also performed with composers Peter Stopschinski and Graham Reynolds, as well as singers Christopher Cross and Jenny Lewis. She has appeared in numerous productions with Local Opera Local Artists (LOLA) and in duo concerts with violinist Sonja Larson. In demand as a continuo player, Karakousoglou has been a member of the Bach Cantata Project and the Early Music Ensemble at the Butler School of Music and appeared with them to perform the U.S. premiere of the N. Porpora Cello Concerto in A minor. With more than 20 years of teaching and coaching experience, Karakousoglou continues to work with private students and designs curriculum for schools and private teachers. As a consultant, she works one-on-one with music teachers, empowering them to grow beyond the limitations of traditional music training and master meaningful and effortless teaching.