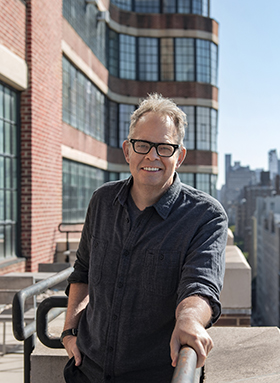 Ned Crowley has been part of the Chicago theatre scene since the mid-80s as a founding member of the comedy group White Noise, where he co-wrote, co-directed and co-starred in such productions as The Book of Blanche, Stumpy’s Gang and Ad-Nauseam. He later went on to direct others onstage including Amy Poehler and Matt Walsh in The Upright Citizens Brigade and, more recently, writing and directing his own feature film titled Middle Man. The film is an award-winning dark comedy starring Jim O’Heir (star of Parks and Recreation), Andrew J. West and Josh McDermitt (from The Walking Dead) and Anne Dudek (from Mad Men). Middle Man recently took top honors at the Seattle International Film Festival and the Edmonton International Film Festival before going onto a national theatrical release and a stint on Netflix. Crowley is also the writer of the festival-winning dramatic comedy Parting Words. A published children’s book author and illustrator, Crowley currently serves as the global chief creative officer for mcgarrybowen advertising, where he has written, produced and overseen hundreds of commercial productions. Crowley currently and happily lives in Oak Park, Ill., with his wife and three daughters.