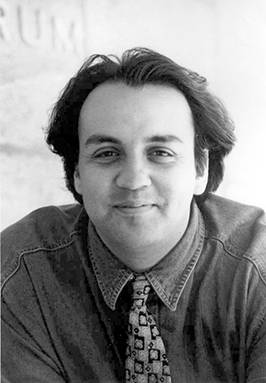 Luis Alfaro is a critically acclaimed writer/performer who works in poetry, plays, short stories, performance and journalism. Chicano born and raised in the Pico-Union district of downtown Los Angeles, he is the recipient, among other awards, of a MacArthur Foundation Fellowship and an NEA/TCG residency grant. In 2002 he was awarded the Kennedy Center Fund for New American Plays twice, for his plays Electricidad and Breakfast, Lunch and Dinner. Electricidad received its world premiere at the Borderlands Theatre in Tucson, Ariz., and was subsequently produced at the Goodman Theatre in Chicago, and has an upcoming production at the Mark Taper Forum in Los Angeles. A highly anthologized writer, he is featured in the anthologies O Solo Homo (Grove Press), Twelve Shades Red (Graphically Speaking LTD) and Particular Voices: Portraits of Gay and Lesbian Writers (MIT Press); Out of the Fringe: Contemporary Latina/o Theatre and Performance (TCG) and Extreme Exposure: An Anthology of Solo Performance Texts from the Twentieth Century (TCG).

He is a member of the New York playwrights' organization, New Dramatists, and was a resident artist at the Mark Taper Forum, where he is also co-director of the Latino Theatre Initiative. He was a visiting artist at the Kennedy Center in Washington, D.C., where he created Black Butterfly, Jaguar Girl, Piñata Woman and Other Super Hero Girls, Like Me, as part of the New Visions/New Voices youth theater program. Black Butterfly... is also performed as part of the Mark Taper Forum's PLAY touring program.

He has toured his performance work throughout the United States, England and Mexico. His short film, Chicanismo, was nominated for an Emmy award, won Best Experimental Film at the 1998 San Antonio CineFestival and was featured in San Francisco's CineAcción '98. A member of The Dramatists Guild, he is the winner of the 1998 National Hispanic Playwriting Competition and the 1997 Midwest PlayLabs for his play Straight As a Line which was seen in New York at Primary Stages, in Minneapolis at 3 Legged Race and in Los Angeles at Playwright's Arena and had its world premiere at the Goodman Theatre. His play Bitter Homes and Gardens premiered in Los Angeles at Playwrights Arena. Breakfast, Lunch and Dinner was commissioned by South Coast Rep and was workshopped at the Public Theater. He teaches throughout Los Angeles including the University of Southern California and California Institute of the Arts.