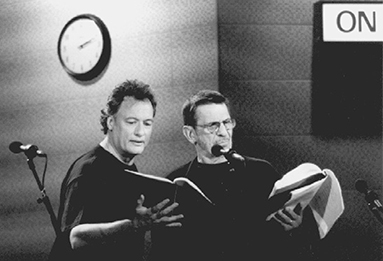 Leonard Nimoy was born in Boston, Mass., on March 26, 1931. He performed on stage, from the early age of eight through his teens, in various amateur productions. In 1949 he set out for Hollywood, where he took acting classes, lived in a rooming house, and worked odd jobs to support himself.

His film debut came in 1951, when he landed small part in "Queen for a Day." In 1952, he had his first lead, in "Kid Monk Baroni." After a two-year stint in the Army, he went back to work in feature films, television and theater.

During the late 50's and early 60's, Nimoy appeared in all the well-known television shows of the period including "Wagon Train," "The Man from U.N.C.L.E.," "Rawhide," "Perry Mason," and "Combat." There were also several apearances in feature films and theatrical productions. It was Nimoy's success in the science fiction series "Star Trek" which gained him world-wide recognition. His portrayal of the Vulcan earned him three Emmy nominations. Nimoy also became a successful movie director, responsible for "Star Trek III: The Search for Spock" and "Star Trek IV: The Voyage Home." He also executive produced "Star Trek VI." Additional directional credits include "The Good Mother," "Three Men and a Baby," "Funny About Love," and "Holy Matrimony."

Nimoy has starred in numerous stage productions including, "Camelot," "The Man in the Glass Booth," "Twelth Night," "Oliver," and a record-setting tour in "Fiddler on the Roof." With "Vincent," a one-man play which he also produced and directed, Nimoy toured 35 cities in the United States and eventually taped the play, at the Gutherie Theater in Minneapolis, for broadcast on the A & E Network. Another hit was in the title role "Sherlock Holmes" in the Royal Shakespeare Company's national tour. On Broadway, Nimoy has starred in "Equus" and "Full Circle."

On television he spent two years on the "Mission: Impossible" series and appeared in a number of television movies, including "A Woman Called Golda," in which he co-starred opposite Ingrid Bergman and for which he received an Emmy nomination for Best Actor in a Dramatic Special.

In 1991, he was seen on TNT in "Never Forget," in which he portrayed a survivor who fought a successful court battle against Holocaust deniers. The show, which he also co-produced with partner, Robert Radnitz was nominated for a Cable ACE Award. He has also hosted the highly successful "In Search Of..." series and has served as host/narrator of "Ancient Mysteries" on the A & E Network.

Nimoy has written three volumes of poetry and recorded ten narrative albums. In 1975, he published an autobiography entitled I am Not Spock. After a 20 year gestation period, he wrote a sequel entitled I Am Spock, which he refers to as "coming to terms" with his alter ego. Nimoy's performance of the audio version was nominated for a Grammy Award.

Nimoy's black and white art photography is represented in several galleries nationwide. His most recent exhibit was at Louis Stern Fine Arts in Beverly Hills, Califonia.

Most recently Nimoy and fellow actor John de Lancie started a production company called Alien Voices®. To date they have produced audio dramtizations of H.G. Wells' The Time Machine, Jules Verne's Journey to the Center of the Earth, Sir Arthur Conan Doyle's The Lost World, H.G. Wells' The Invisible Man, and The First Men in the Moon for distribution by Simon and Schuster Audio. Radio scripts are available through Dramatic Publishing.