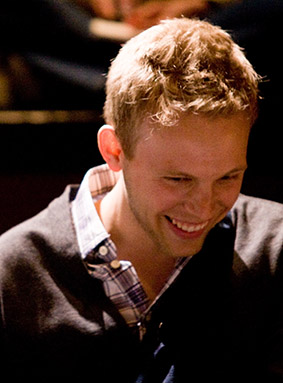 Benj Pasek and Justin Paul are the Tony-nominated songwriters of the Broadway musical, A Christmas Story, The Musical (Director John Rando and Choreographer Warren Carlyle), which opened in November 2012 and enjoyed a critically acclaimed, record-breaking run at the Lunt-Fontanne Theatre. In addition to the Best Original Score Written for the Theatre nomination, A Christmas Story, The Musical also received Tony nominations for Best Book of a Musical and Best Musical. The holiday musical was named one of the Top 10 Plays and Musicals of 2012 by TIME magazine, shared recognition as the Best Musical of 2012 in USA TODAY, received a Drama Desk Award nomination for Outstanding Musical and an Outer Critics Circle nomination for Outstanding New Broadway Musical. Pasek and Paul's score for A Christmas Story, The Musical also received a Drama Desk nomination for Outstanding Music. The cast album was recorded and produced by Sony Masterworks and is published through Warner/Chappell Music. Pasek and Paul are also the composers of the off-Broadway musical Dogfight (Director Joe Mantello, Choreographer Christopher Gattelli), which premiered in July 2012 at Second Stage Theatre. The show received a nomination from the Drama League for Outstanding Production of a Broadway or Off-Broadway Musical, was the winner of the Lucille Lortel Outstanding Musical Award and received Outer Critics Circle nominations for Outstanding New Off-Broadway Musical and Outstanding New Score. Dogfight's cast album, produced by Sh-K-Boom + Ghostlight Records, was released in May 2013 and debuted in the top 50 albums on iTunes. As television songwriters, their original songs were featured on season two of NBC's Smash and rose to the top 25 on the iTunes Pop Charts. The duo made their debut as songwriters with their widely acclaimed musical Edges, which is licensed by Music Theatre International and has had hundreds of productions worldwide, including South Korea, Australia, China, South Africa, Singapore, France, the Philippines, Denmark and more. Other theatrical works include James and the Giant Peach (Kennedy Center and Goodspeed Musicals, Director Graciela Daniele and Choreographer Pilobolus), Duck for President and If You Give a Pig a Pancake (Theatreworks USA). Their musical work for TV can be seen on Sesame Street and Johnny and the Sprites (a Disney television series). Performances of their songs have been featured on Late Night with Jimmy Fallon, The View, Good Morning America, CBS' Sunday Morning, VH1's Big Morning Buzz, The Rosie Show, Fox & Friends and more. Pasek and Paul are the recipients of the 2011 Richard Rodgers Award for Musical Theatre from the American Academy of Arts and Letters, a 2011 Sundance Institute Fellowship, the 2011 ASCAP Foundation's Richard Rodgers New Horizons Award, the 2011 ASCAP Songwriters Fellowship Award and a 2007-2008 fellowship from The Dramatists Guild. They are the youngest recipients of the Jonathan Larson Grant (2007) in the foundation's history. They have participated in ASCAP's Johnny Mercer Foundation Songwriters Project and were named one of The Dramatist magazine's "50 to Watch" in contemporary theatre. As performers, Pasek and Paul have traveled throughout North America, Europe and Australia performing concerts of their work. They also teach master classes in songwriting and theatre performance at universities around the world. They are proud graduates of the University of Michigan with BFAs in the musical theatre program. Currently, Pasek and Paul are working on a new original musical with playwright Steven Levenson.