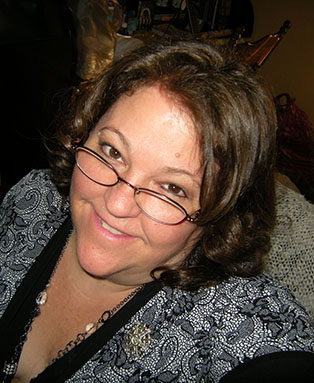 Julia Lander is a teacher, songwriter, playwright and novelist who lives with her husband in Dayton, Ohio. She grew up with the varied background sounds of Smetana's The Moldau blasting on the stereo, piano concertos, violin and flute duets, baroque recorder etudes, guitar-strummed Vietnam-era folk songs, and thrumming electric bass-lines of '60s and '70s rock 'n' roll, all of which gave her sound grounding in rhythm and rhyme. But her mother was first to inspire her love of musical theatre. Together, they wore out the grooves on such vinyl LPs as The Man of La Mancha and The Sound of Music. Lander's passion for writing began almost as soon as she could pick up the pen, with tales of backyard fairies and the story of a jolly widowed farmer trying to raise a houseful of precocious daughters. But the family's favorite was her rhyming story of a Victorian spinster, Lydia Gray, who saved herself from a house fire by throwing her many skeins of yarn out the window to jump onto, the very ones she'd saved for years but never used, saying to those who teased her for it, "True I can't knit or crochet as you say, but I feel all this yarn will prove useful someday." In 5th grade, Lander began journaling and writing poems and historical skits and, inspired by her sisters, taught herself to play guitar. By the 8th grade, she was leading the music at a weekly school mass, which blossomed into church music directing in high school. There she became a self-admitted band nerd and then came out of her shell senior year to dazzle her peers with her performance as musical narrator in Joseph and the Amazing Technicolor Dreamcoat. During college, she was asked to write and host a cable TV show called Guitar Basically and became a local singer-songwriter, opening for headliners at Dayton's Canal Street Tavern and The Web Center Coffeehouse and producing two CDs, The State of Our Union and Hungry for the Tribe. She was invited to showcase her songs live at WvYSO Radio's Women in Music 20th Anniversary Show. After graduating Wright State University, she taught music, English and history and usually became the one-woman drama department of every school in which she taught. It was during this time that she began writing and directing a series of one-act children's plays commemorating such historic figures as Thomas Edison and Rosa Parks, eventually featuring Dayton's Wright Brothers in 2003, to celebrate the 100th anniversary of flight. This evolved into Dramatic Publishing's musical Flyers by Lander and her sister Carol. She is currently putting the finishing touches on her yet-to-be-published suspense novel The Snow's Thaw..