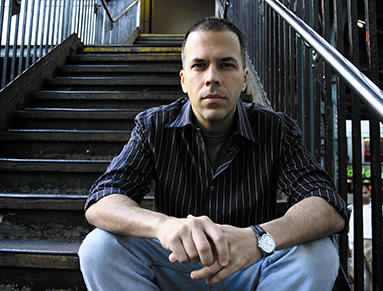 Jorge Ignacio Cortiñas' many achievements include fellowships from the National Endowment for the Arts and the New York Foundation for the Arts, the Helen Merrill Playwriting Award, "playwright of the year" in El Nuevo Herald's 1999 year-end list, a Writer's Community Residency from the YMCA National Writer's Voice and the Robert Chesley Award, among others. His first play, Maleta Mulata, was produced by Campo Santo in San Francisco. His second play, Sleepwalkers, was produced by the Area Stage in Miami in 1999, where it was awarded a Carbonell Award for Best New Work given by the South Florida Critics Circle. Sleepwalkers was further developed and produced by the Alliance Theatre in Atlanta in 2002. Cortiñas' Tight Embrace was produced by INTAR Theatre in New York. His play Blind Mouth Singing completed runs at Chicago's Teatro Vista and the New York-based National Asian American Theatre Company, productions the Chicago Tribune praised as having "visionary wit" and The New York Times called "strange and beautiful" and designated a Critics' Pick. Cortiñas' works have been published by Playscripts, Inc., and TDR/The Drama Review. He has been commissioned by the Mark Taper Forum, South Coast Repertory and Playwrights Horizons. He is a usual suspect at the New York Theatre Workshop and an alumnus of New Dramatists.

Bird in the Hand