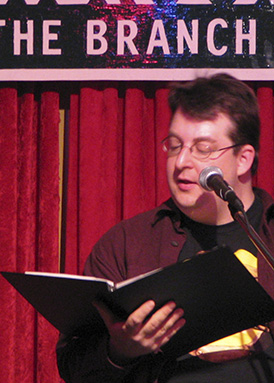 John Weagly’s work has been called exuberant, charming and appealingly quirky. In the early ’90s, Weagly toured the United States as a writer/performer with the comedy improv team Authorized Personnel. His first play, Dr. Goat: Goat Doctor, was produced by the Bloomington Playwrights Project (Bloomington, Ind.) in 1992. Since then, he’s had more than 75 scripts receive more than 100 productions by theatres around the world. Some of the theatres that have produced his plays include Dandelion Theatre (Chicago), Truffle Theatre Company (Brooklyn), The Artistic Home (Chicago), Stage Q (Madison, Wis.), The Second City (Chicago), Ensemble Theatre of Chattanooga (Chattanooga, Tenn.), Strawdog Theatre Company (Chicago), Screaming Media Productions (Halifax, England), the InspiraTO Festival (Toronto) and Belarusian Dream Theater (Copenhagen, Denmark). In 2010, a production of his short play Scuffle & Jump by Fort Point Theatre Channel in Boston received live musical accompaniment from Peter Tork of The Monkees. As a fiction writer, he was nominated for the Derringer Award six times, winning one in 2008. He was also nominated for a Spinetingler Award, and he won the Norumbega Fiction Award for his short story collection, The Undertow of Small Town Dreams, in 2004. He can be seen in the 2008 documentary Vincent: A Life in Color reading one of his haikus.