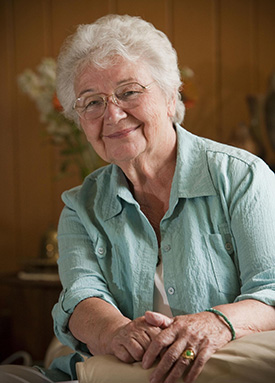 Ilga Katais-Paeglis Vise and her parents fled their homeland in 1944, near the end of World War II, when the Soviet Union invaded Latvia. During their journey, they walked 500 miles across Poland and Germany. After the war ended, they spent six years in a refugee camp supported by the United Nations. They were fortunate to be sponsored by the First Congregational Church in Oak Lawn, Ill., in the spring of 1951. After high school, Vise graduated from Northwestern University in Evanston, Ill., in 1957 and then earned a master's degree from National Louis University in Evanston, Ill. Her career in education led her from first-grade to college teaching at Drury University, Springfield, Mo., where her husband, Sidney, was a music professor. In their retirement, they have enjoyed many travels, including a trip to Latvia with their son, David, and daughter, Silvia, her husband and two grandsons.