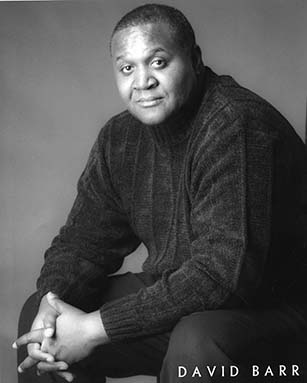 David Barr III's first full-length play, The Death of the Black Jesus, helped him become a recipient of an Illinois Arts Council Fellowship (1995). Black Jesus was the winner of the National Playwriting Award sponsored by the Unicorn Theatre in Kansas City, Missouri (1994), and the winner of the Mixed Blood Versus America National Playwriting Contest sponsored by the Mixed Blood Theatre in Minneapolis (1993). The Death of the Black Jesus was first produced at the Unicorn Theatre (1995) and made its Chicagoland premiere (1996) at the Chicago Theatre Company. The play was published by Dramatic Publishing in 1996. His adaptation of the Walter Mosley novel A Red Death had its world premiere in September 1997 at the Chicago Theatre Company. It won the 1998 Edgar Allan Poe Award, sponsored by the Mystery Writers of America in the Best New Play category. Barr's two-act drama, Black Caesar, was the winner of the 1997 Theodore Ward Contest for Playwriting, sponsored by Chicago's Columbia College. PerformInk, Chicago's entertainment tradepaper, published Black Caesar in October 1999.

In January 1999, Barr received his second Illinois Arts Council Fellowship for Playwriting/Screenwriting. His play Ev'ry Time I Feel the Spirit (Dramatic Publishing 2004), based on the life of Marian Anderson, was the winner of the 1999 Unicorn Theatre National Playwriting Award. It opened at the Unicorn Theatre in June 1999 and made its Chicago premiere at Pegasus Players in November 2000. In September 1999, his full-length play The Face of Emmett Till (formerly The State of Mississippi vs Emmett Till) debuted at Pegasus Players. The play was developed with Mrs. Mamie Till Mobley and is based on the life and tragic death of her son Emmett Till and was revived in the fall of 2003, again at Pegasus Players. Barr is a co-adapter of The Journal of Ordinary Thought, a stage adaptation of poems and monologues written by members of the Neighborhood Writing Alliance. The Journal of Ordinary Thought had its world premiere at the Chicago Theatre Company in September 1999. It was voted one of the Best Plays of 1999 by both the Chicago Tribune and the Chicago Sun-Times. In March 2000 it was named winner of the Festival of Emerging American Theatre (FEAT) National Playwriting Competition, sponsored by Phoenix Theatre Company in Indianapolis, and played there in the spring of 2000.

The Death of the Black Jesus

Ev'ry Time I Feel the Spirit

The Face of Emmett Till