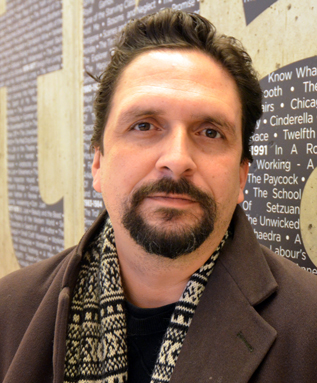 Carlos Murillo is a Chicago-based, internationally produced playwright of Colombian and Puerto Rican descent. He is a recipient of a 2015 Doris Duke Impact Award for his work in theatre. His plays have been produced throughout the U.S. and Europe. His best-known play, Dark Play or Stories for Boys, premiered at the Humana Festival at Actors Theatre of Louisville and has been performed throughout the U.S., Germany, Poland, Slovakia, Hungary and Lithuania. His other work has been seen in New York at Repertorio Espa–ol, Page 73, the NYC Summer Playwrights Festival, En Garde Arts and Soho Rep; in Chicago at the Goodman Theatre, Steppenwolf, Collaboraction, Walkabout Theatre, Adventure Stage Chicago and Theatre Seven; and in Los Angeles at The Theatre @ Boston Court, Circle X and Son of Semele. He has been commissioned by the Goodman Theatre, The Public Theater, Playwrights Horizons, Berkeley Repertory Theatre, South Coast Repertory and Steppenwolf. Published works include The Javier Plays (53rd State Press), Mimesophobia (Broadway Play Publishing), Dark Play or Stories for Boys (Dramatists Play Service) and A Human Interest Story (Dramatists Play Service). He is the recipient of Repertorio Espa–ol's Met Life Nuestros Voces Award, New Dramatists' Frederick Loewe Award, the Goodman Theatre Ofner Prize, the Otis Guernsey Award from the William Inge Theatre Festival, a Playwrights' Center Jerome Fellowship and two National Latino Playwriting Awards from Arizona Theatre Company. Murillo heads the BFA playwriting program at The Theatre School of DePaul University and is a proud alumnus of New Dramatists. He lives on the south side of Chicago with his wife, Lisa Portes, and their two children, Eva and Carlitos. Photo: Andrea Tichy.